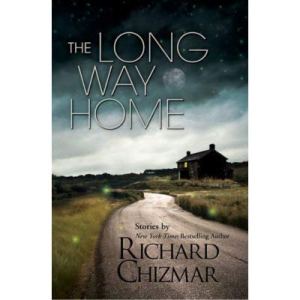 Eerie, suspenseful, poignant, the stories in The Long Way Home run the gamut from horror to suspense, crime to dark fantasy, mainstream to mystery. This brand new collection features more than 100,000 words of short fiction, as well as more than 5,000 words of autobiographical Story Notes.

Chizmar’s highly diverse collection of 17 short stories, two essays, and a script are mostly co-written with other authors and were previously published elsewhere but all feature beautifully written prose and an incredibly strong authorial voice. The collection covers a wide range of genres, not exclusively all subgenres of horror, which pulls the reader in no matter what their tastes.

As this is the first work by Chizmar I have read, the two non-fiction essays included in the collection are a perfect introduction to the author, his inspirations, and his personal history. ‘My Father and Ellery Queen’s Mystery Magazine‘ and ‘Stephen King at 70: A Tribute to the Gunslinger’ both elaborate on two of Chizmar’s biggest influences, his father and Stephen King. The latter essay explains why Chizmar established Cemetery Dance magazine and the important part Stephen King played in the magazine.

Linked with these autobiographical essays are Chizmar’s two stories on the topic of fathers and sons; ‘Silent Night’ is set on Christmas Eve and is about a man on the run but who must see his young son. Similarly, the titular story, ‘The Long Way Home’ is about a son who is trying to get home for his father’s funeral. Both aren’t strictly horror stories but are incredibly touching and beautifully written.

The rest of the collection can be broken into various themes which regularly overlap and feature recurring characters and settings. Several stories feature cops, particularly partners, both clean and dirty; ‘The Bad Guys’ is about a dying partner’s confession, whilst ‘Dirty Coppers’ is a sci-fi story reminiscent of Blade Runner in places. Partners Ben and Frank also feature in two stories: ‘The Witch’, a story set on Halloween night that features a murder and ‘The Hunch’. In all these stirs, as in ‘Silent Night’ and ‘The Long Way Home’, human relationships are discussed in a tender manner.

Murderers and their victims also feature in several stories. ‘The Man Behind the Mask’ concerns what happens after a crime has been committed and the lasting effects of escaping a horrific crime. ‘A Nightmare on Elm Lane’ was one of my personal favourites in the collection as it has a great premise (a father and son are digging in their back garden and find something unexpected) and a fantastic ending. ‘The Man in the Black Sweater’ is a drabble, a 100-word story that illustrates what can be done in 100 words when written by an expert. It’s a short revenge tale that is perfectly chilling.

The theme of the murderer overlaps with the supernatural in ‘Mischief’ in which a reporter is interviewing a murderer in prison. The supernatural also features in ‘The Custer Files’, which is an impressive historical story about General Custer’s Seventh Cavalry and the Old West. In another favourite story ‘The Sculptor’, the supernatural is unleashed in what may also be madness. Either way, it’s an incredibly vivid story because of its strangeness.

Hauntings also feature prominently in the collection. In ‘Murder House Script’, a screenplay written by Chizmar and his son Billy, it’s unclear whether the goings-on are supernatural or not but the house is certainly haunted by the past. Chizmar also co-wrote ‘Widow’s Point’ with his son. Set in a lighthouse, it’s a highly effective epistolary tale using video and audio recordings. Unsurprisingly, it’s now a book co-written by the pair that was published in 2018. It was adapted for screen and there are plans for a prequel and a sequel.

The remainder of the stories are a combination of the previous themes and the weird. ‘Roses and Raindrops’ is about strange killings. Another favourite of mine was ‘The Meek Shall Inherit…’ which strangely reminded me of Stranger Things: two boys are trying to imagine what might be going on in their neighbour’s basement. I loved this story because, like at the end of ‘The Sculptor’, there is the implication that much more horror occurs after the story finishes. ‘Odd Numbers’ is a story about madness and one man’s OCD, whilst ‘The Association’ is a genius and comical story about the dangers of annoying one’s new neighbours and housing association.

Interestingly, the collection ends with Chizmar’s notes about the writing of each story and his various influences and concerns. A major concern throughout the collection is the duality of the American suburb and the horror that can linger just beneath the surface.

He is the co-author (with Stephen King) of the bestselling novella, Gwendy’s Button Box and the founder/publisher of Cemetery Dance magazine and the Cemetery Dance Publications book imprint. He has edited more than 35 anthologies and his short fiction has appeared in dozens of publications, including multiple editions of Ellery Queen’s Mystery Magazine and The Year’s 25 Finest Crime and Mystery Stories. He has won two World Fantasy awards, four International Horror Guild awards, and the HWA’s Board of Trustee’s award.

Chizmar (in collaboration with Johnathon Schaech) has also written screenplays and teleplays for United Artists, Sony Screen Gems, Lions Gate, Showtime, NBC, and many other companies. He has adapted the works of many bestselling authors including Stephen King, Peter Straub, and Bentley Little.

His latest book, The Girl on the Porch, was released in hardcover by Subterranean Press, and Widow’s Point, a chilling novella about a haunted lighthouse written with his son, Billy Chizmar, was recently adapted into a feature film.

Chizmar’s work has been translated into more than fifteen languages throughout the world, and he has appeared at numerous conferences as a writing instructor, guest speaker, panelist, and guest of honor.