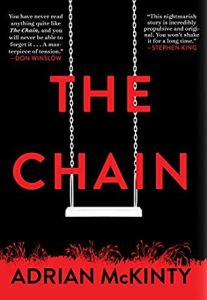 Victim. Kidnapper. Criminal. You will become each one. You are now part of the chain. Don’t break the chain.
The only way to get your child back is to kidnap another.

Listen carefully…
Your child has been kidnapped.
You must abduct someone else’s child to save your own.
Disobey. Break the rules. Go to the cops. Your child will die.
Your victim’s parents must kidnap another child before yours is released.
You are now part of the chain.

Described by Don Winslow as “Jaws for parents”, The Chain involves a scenario that is every parents’ worst nightmare and is a no holds barred look at what a parent will do for their child. The book has received a lot of word of mouth being mentioned several times by various writers at Noireland 2019 and on the Two Crime Writers and a Microphone podcast.

The titular chain of McKinty’s book is partially based on Mexican exchange kidnappings, in which people offered to take the place of loved ones after they have been kidnapped by Mexican drug cartels. It was also partially inspired by the chain letters McKinty remembers from his schooldays, which frankly terrified us all with their promises of retribution if the chain was broken.

Rachel O’ Neill is introduced to us as quite a vulnerable but still resilient character; when we first meet her she’s driving to an appointment with her oncologist to check that her breast cancer is in remission. We know she has already been to hell and back but she’s about to be tested even more. She receives a phone call telling her that her daughter Kylie has been kidnapped. She must first pay a ransom in Bitcoin and she must also kidnap another child before Kylie can be released. If she alerts the police or tells anyone about it, Kylie is dead. It’s an incredibly simple idea yet it is truly terrifying. Rachel soon puts a plan together, recruiting her ex-Marine brother-in-law Pete to help her with the kidnapping. But Pete is now a drug addict, which introduces another layer of danger and unpredictability to the situation. This is a breakneck high concept thriller right from the very first page and the pace never lets up, testing Rachel at every turn.

As with many other recent crime thrillers, The Chain is a comment on the dangers that come with social media, as Rachel finds it incredibly easy to determine when kids will be left alone without their parents as well as intimate details about the children. It’s a concept that’s all too familiar to those of us with social media accounts and speaks to a very real contemporary anxiety. And with this anxiety comes the thirst for financial gain and a sense of power. As the narrative progresses, we come to understand the origins of the chain and its perpetrators.

The strength of the book is not only the main concept but what McKinty puts Rachel through, from worrying about whether the cancer is back, to worrying about Kylie and whether her kidnappers are treating her well, to worrying about the child that she herself kidnaps, and worrying about how reliable Pete actually is. We’re always told to make our characters suffer and to raise the stakes. Here, McKinty offers a masterclass in suspense but all through a gritty reality.

McKinty is a superbly gifted writer and has already won a string of awards including an Edgar Award and a Ned Kelly Award for books in his Sean Duffy series. In these books, which can be described as Belfast noir, his detective, Sean Duffy, is a Catholic navigating his way through The Troubles. The Chain is a very different book to McKinty’s previous works as its set in Massachusetts, a location shift that may attract a bigger readership. McKinty’s debut, Dead I Well May Be, was published in 2003 so it’s fantastic that he has attracted a bigger readership. It was reported a few weeks ago that Paramount made a seven-figure film deal for The Chain so we’re going to be hearing a lot more about both the book and the film and deservedly so.

The Chain stays with you long after you’ve finished it.

Adrian McKinty is a crime novelist from Belfast, Northern Ireland.

His books have won the Edgar Award, the Anthony Award, the Ned Kelly Award and the Barry Award. Adrian is also a two time Dagger nominee and shortlistee for the Theakston Crime Novel of the Year.

He studied law at Warwick University and philosophy at Oxford University before emigrating to New York City in the mid 90s. 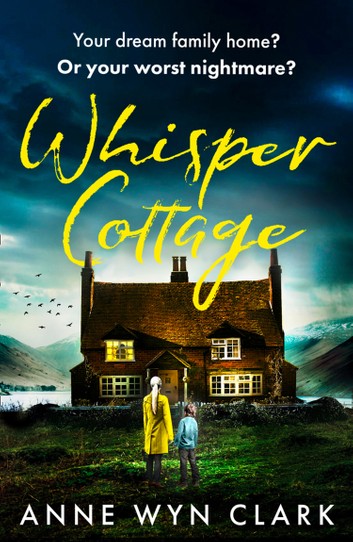