The NOIRELAND International Crime Fiction Festival doesn’t have to worry about distinguishing itself from other literary festivals in Ireland because it takes place in Belfast, a city known for its dark past. In addition, the festival took place in the Europa Hotel, the perfect location for a crime fiction festival from a historical perspective. Although a bustling cosmopolitan city today, the tension between the Belfast of the past and the present came up in several panels as writers sought to leave the Troubles behind and focus on more straightforward crime fiction. At the moment, crime writing is flourishing in Northern Ireland and writers agreed that it was born out of what they experienced growing up in the North but that it can only really thrive and be fully expressed in peaceful times. Co-organised by David Torrans, owner of No Alibis in Belfast, the North’s only crime fiction bookshop, and Angela McMahon, the festival perfectly celebrated this creativity both in Northern Ireland and internationally and the ongoing fascination we have with the darker side of human nature.

I went to the festival from the perspective of an aspiring writer within the genre and I was delighted to find myself in the company of the superstars of crime fiction as well as up-and-coming writers but everyone was equally happy to chat about their experiences and writing processes. Every panel I attended delivered a wealth of knowledge on general topics including the writing process and research as well as more specific topics including the overarching characters and social themes that are central to the genre today.

The first panel of the weekend was ‘An Englishwoman, an Irishwoman, and a Scotswoman Walk into the Noir.’ The women in question were Belinda Bauer, Jo Spain, and Denise Mina respectively and together the three writers provided the perfect introduction to the festival as they discussed issues including the figure of the detective and policing in general with a fantastic sense of humour. With its genuine sense of camaraderie, the panel perfectly set the tone for the rest of the festival as the closeness of the crime writing community was evident both onstage and off.

The first night of the festival also featured Anthony Horowitz in conversation with Brian McGilloway and the topics covered ranged from the popularity of Horowitz’s Young Adult fiction to the worldwide success of his crime writing. He recounted his memories of childhood and what prompted him to start writing in the first place as well as his writing process and his influences. His enthusiasm and love of writing really came across as well as his good humour.

Several panels addressed the important character tropes of the genre. Andrea Carter discussed the role and importance of the victim with Elodie Harper, Dervla McTiernan, and M.J. Arlidge. The writers discussed how the victim has changed in recent years in the genre from simply being a cadaver at the crime scene to becoming a more central character. Importantly, the panel mentioned how the role of the victim is still gendered within contemporary crime fiction with women still usually being victimised. However, the writers discussed how this is changing and the implications of these changes on the genre.  The panel also addressed the nuances and benefits of writing from the perspective of the victim. 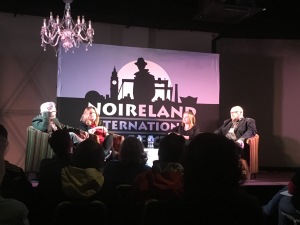 In contrast, Gerard Brennan discussed the role of the villain with Steve Cavanagh, Karen Hamilton, and Elly Griffiths. What really came across on this panel was how much fun the authors had when writing their villains. Interestingly, they also touched on who they think are real-life villains and how important it is to fully consider whose perspective the story is told from. The panel also discussed important evolutionary reasons for our fascination with the genre and with the figure of the villain.

The ‘Mum’s the Word’ panel looked at the role that the mother (and father) has to play in the genre, both positively and negatively. Claire McGowan discussed issues of parenthood with Haylen Beck (Stuart Neville), Claire Allan, and Nuala Ellwood. This was undoubtedly the most sensitive panel I attended as the issues of stillbirth and grief came up but the topics were handled incredibly sensitively. The panel also discussed the real-life issues that female writers who are also mothers face as the issues of guilt and working from home were tackled. Overall, the panel revealed that the image of the bad mother or bad woman is still taboo and is still a central trope of the genre today.

Several panels discussed important contemporary social issues including political villainy and the impact and potential impact of Brexit on writing in general and on the genre. In fact, these themes were discussed in several panels throughout the weekend, not just in the panels specifically dedicated to the topics. Sarah Vaughan and D.B. John talked to Alex Kane about the figure of the politician and how they are portrayed in the genre as well as the process of writing them. Both authors’ books show the corrupt nature of politicians but they did hint at the possibility that not all politicians may be dishonest.

In addition, Declan Hughes discussed Brexit with Martin Waites, Brian McGilloway, and Aidan Conway. In the panel, the writers discussed how social issues are rarely incorporated into fiction contemporaneously with its occurrence and how satire might be the first mode of writing about Brexit.

Another ongoing theme throughout the weekend was the role that technology plays in the genre, how it is changing society in general, how it has changed how authors research, and how it is reflected in the books themselves. In the ‘Crime and (Anti) Social Media’ panel, Gerard Brennan discussed the positive and negative effects of social media on society and the genre with Claire Allan, Adam Hamdy, and Thomas Enger. This was undoubtedly the most terrifying panel I attended as Hamdy shared his findings about what social media is doing to society today and about how our addiction is literally changing our physiology. Hamdy also touched on the dangers of social media from a social perspective and how hate groups are using social media platforms.

Linked with this was a panel on the rise of true crime, where Eoin McNamee discussed the recent resurgence of the popularity of true crime with Matt Wesolowski and Olivia Kiernan. The authors discussed their research of true murder cases as well as how they use documentary methods within their own work. The writers stressed the importance of remembering that killers aren’t simply monsters and that they have a backstory like the rest of us that must be explored.

One particular panel discussed gothic elements in crime fiction, which prompted a wider discussion of subgenre and the inclusivity of the crime fiction genre. In this panel, Elly Griffiths discussed the gothic with Laura Purcell, Caroline Lea, and William Ryan and looked at how more historical narratives with supernatural elements can still be considered crime fiction.

Last, but certainly not least, the Jack-a-noir-y event on the Saturday night of the festival included a reading from John Connolly’s upcoming book A Bag of Bones. It was read by Adrian Dunbar, the perfect storyteller from a genre perspective. The reading itself was introduced by Brian Cliff, David Torrans, and Stuart Neville and was perfect pre-publicity for the book.

Like all festivals, I inevitably couldn’t go to every panel and I missed a few events that I really wanted to see. Unfortunately, I also didn’t have time to do the Belfast Noir walking tour operated by Belfast Hidden Tours but that’s for my next visit.

Overall, the festival was perfect for any fan of, or anyone interested in writing in, the genre and I couldn’t recommend it highly enough. I look forward to the next festival already. Now I’m off to work on my own book!