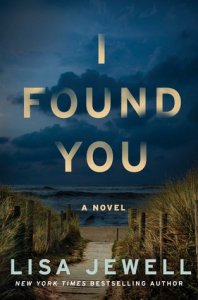 Two women. Twenty years of secrets. And a man who doesn’t remember anything.
Or does he?

Lisa Jewell’s most recent book Then She Was Gone was first published in July 2017 but I’m taking a look at the book released before that in 2016. I Found You is an impressive page turner that brings together well-written characters and an intriguingly interwoven plot.

One day on the Yorkshire Coast, single working mother Alice Lake looks out her window to see a fortysomething man sitting soaked to the skin on the beach. When he is still there hours later, she invites him into her home and discovers that he is suffering from severe amnesia. He doesn’t know how he came to be on the beach, where he lives, or even his own name, though the children nickname him ‘Frank’. Alice soon discovers the implications of inviting a stranger into her hectic life with her children and makes it her mission to help him regain his memory. But, as his memories start to return, she wonders if he is as gentle and innocent as he seems.

Meanwhile, Lily Monrose’s husband Carl doesn’t come home from work one day. Lily has only been living in the UK for a few weeks and Carl’s daily routine is usually very predictable: he gets the same train home from work every day and arrives home at the exact same time each evening. When he suddenly disappears, she fears the worst. He seems like the perfect man but she soon starts to question everything that he has told her. When she reports him as a missing person and starts looking into his past, she uncovers secrets that he undoubtedly wanted to remain hidden.

In the Summer of 1993, Graham ‘Gray’ Ross and his younger sister Kirsty are on holidays in Ridinghouse Bay with their parents. When a stranger, nineteen-year-old Mark, takes a liking to fifteen-year-old Kirsty, Gray becomes suspicious of him. There’s something about him that Gray doesn’t like but he can’t quite figure out what it is. The Ross family soon become embroiled in an encounter that will change their family, and their lives, forever.

Jewell’s novel expertly weaves these three very distinct narratives together and they culminate in a very unexpected and refreshing way. And although the plot is complicated, the book is never itself overly convoluted. I don’t want to give away any twists because that is one of the joys of reading the book but the book is perfectly paced and the tension is always handled in a sophisticated way. From some of the blurbs and descriptions written about the book, you’d be forgiven for thinking I Found You is a romance. And whilst there are romantic elements in it, it’s much darker and a lot more sinister than that. I Found You is a magnificently written and constructed mystery that is reminiscent of the best Hitchcocks or, more recently, a Gillian Flynn or Paula Hawkins novel.

Another joy of reading the book is Jewell’s characters. The book is focalised through numerous people, including Alice, Frank, Lily, Gray, and Kirsty in both the present and in the past and it only becomes clear at the end how they are all connected. The characters are well-developed and all are inherently flawed but are also very likeable, which brings a complexity and authenticity to Jewell’s writing. Of all the characters, Alice Lake is perhaps the most intriguing. She’s a middle-aged single mother who runs a B&B by the beach. Although she’s surrounded by her children and friends and leads a very busy life, she is shown to be an inherently lonely character. When Frank enters her life, we discover just how lonely she is and how much she craves his attention. Similarly, as a result of his amnesia, Frank is also desperate for some care and affection, which Alice is only too happy to give. Their relationship throughout the book shows us how lonely any of us can become in modern life but also how toxic relationships from our past can continue to affect us into the future.

Similarly, Lily moved to the UK from the Ukraine to be with a man she barely knew. And, although her mother begs her to return home because she doesn’t know anyone else in the UK, she is determined to find out what happened to the man she married. No matter how dangerous he may be. When we first meet Lily, we is a romantic at heart and considers the UK to be a place where all her dreams will come true. What she finds along the way allows her to look at her surroundings and the people around her in a more realistic and rational way.

Ultimately, the three narratives demonstrate how our past lives, encounters, and relationships can come back to haunt us and how small decisions, which we often don’t consider to be that important, can change our lives. I haven’t read Then She Was Gone yet but I look forward to it as Lisa Jewell has quickly become one of the most compelling authors writing today.

Lisa Jewell was born and raised in north London, where she lives with her husband and two daughters. She is the New York Times, Wall Street Journal, and USA TODAY bestselling author of over twenty novels, including The Girls in the Garden, The House We Grew Up In, and The Third Wife. To find out more, visit Facebook.com/LisaJewellOfficial, or follow her on Twitter @LisaJewellUK.