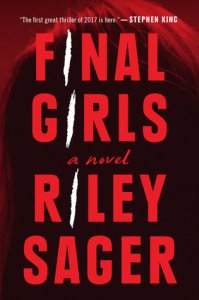 Ten years ago, college student Quincy Carpenter went on vacation with five friends and came back alone, the only survivor of a horror movie–scale massacre. In an instant, she became a member of a club no one wants to belong to—a group of similar survivors known in the press as the Final Girls.

The premise of Riley Sager’s debut novel is very familiar to horror movie fans. Its title, a cinematic term used to describe the lone females that outsmart the killers and survive the slasher movie massacre, was first used in the Vietnam era in reference to films including The Texas Chain Saw Massacre, Last House on the Left, and Halloween. Since then, the term, and the trope has become pastiched in the Scream films, the tv show Scream Queens, and a horde of remakes. Thankfully, Sager’s version of the figure and the typical slasher plot are thoroughly gratifying for horror film fans. Reading the book, we can almost hear Jamie Kennedy’s character Randy listing off the rules of how to survive a horror movie in the first Scream film as we tick off the stereotypes that Quincy conforms to as well as those she transgressed on the night of the murders. The book also makes us think about what happens after the character survives the tragedy. Yes, they have a “happy” ending compared to those that were slain but at what cost? And how well would a Final Girl be able to deal with surviving a massacre today with the pressures of social media?

Sager’s novel begins with Quincy Carpenter (in a nod to John Carpenter?) living a seemingly perfect life ten years after she was the lone survivor of the murders that took place at Pine Cottage, where five of her friends died. She runs a successful baking blog and lives in a Manhattan apartment with her public defender fiancé Jeff. Her lingering trauma is revealed slowly through her Xanax dependency, her kleptomania, and her refusal to talk about the murders. Quincy refuses to take on the public role of a Final Girl, and she works hard to live a quiet and normal life and keep out of the public eye. She is one of three Final Girls, as labelled by the media, and the story begins when one of the girls, Lisa, dies in an apparent suicide. This prompts the other girl, Sam, to show up on Quincy’s doorstep, thereby forcing Quincy to confront her past and how she is dealing with what she experienced. Sam is everything Quincy is not. She is outwardly angry and rebellious and encourages Quincy to be likewise to purge her demons. From the very beginning, it’s clear that Sam is trouble. She doesn’t want to reveal her movements for the previous few years and she is erratic, yet, Quincy is drawn to her.

Most of the book is written in first person from the perspective of Quincy as she tries to figure out what happened to Lisa. But it also tells the story of the night the murders happened from an omniscient perspective as Quincy has no memory of the event. The device works very well as we know what these flashbacks will inevitably lead to, which builds obvious tension. But, they also make us doubt Quincy’s apparent repression as the police were never fully convinced of her innocence or why she was spared that night.

The book is perfectly paced with lots of twists and reveals. As a horror movie fan with an academic interest in the motif of the final girl, I felt that the book works very well within the history of the genre, without seeming cliche. There are typical horror movie moments in the book, including a scene that takes place at night in Central Park and some questionable decisions made by Quincy which I can’t reveal without ruining parts of the book, but true horror fans will recognise certain moments and will appreciate the book’s nods to the genre. It’s clear that Sager is a horror movie fan himself and has worked hard to capture the tone of the films that feature the final girl.

With praise from Stephen King, the book was destined for success: “The first great thriller of 2017 is here: Final Girls, by Riley Sager. If you liked Gone Girl, you’ll like this.” The book works perfectly with several recent thrillers as it combines the whodunit of The Girl on the Train with the damaged characters of Gone Girl. But, most importantly, it is a testament to the lasting presence of the slasher film and sets about updating the subgenre for today’s world and audience. Final Girls moves beyond simply referencing the slasher and instead becomes part of it in its own right.

Riley Sager is a pseudonym for an author who has been previously published under another name. A native of Pennsylvania, Riley is a writer, editor, and graphic designer who now lives in Princeton, New Jersey.
​
In addition to writing, Riley enjoys reading, movies and baking.